Michigander Of The Year . . . (Posthumous)

A 33-year-old Michigan woman who converted to Islam after marrying an Arab immigrant has been shot dead in Syria by government forces who claimed she was part of an al-Qaeda influenced group.

Thank you, Nicole, for making Michigan proud. (Nice hijab !) Your efforts might just make Michigan the  "Jihad Capital of The United States".  What a coup!  Well, it's something to shoot for, anyway!  And to think that Michigan was once famous for silly little things like its Great Lakes and that big bridge.

Afterthought:  Do dead female jihadis get 72 virgin males?  (sounds like hell to me!)
Posted by marleed at 11:37 AM No comments:

. . . the high cost of American freedom.  God give us the grace and the willingness to continue to pay the price to preserve this exceptional nation.


We ARE Americans!
Posted by marleed at 9:47 PM No comments:


It is foolish and wrong to mourn the men who died. Rather we should thank God that such men lived. ~George S. Patton
Posted by marleed at 10:18 AM No comments:

When Barack Obama encouraged graduates at Ohio State University to ignore the "voices" that exhort us to avoid the dangers of oversized government . . .

“Unfortunately, you’ve grown up hearing voices that incessantly warn of government as nothing more than some separate, sinister entity that’s at the root of all our problems; some of these same voices also doing their best to gum up the works.  They’ll warn that tyranny is always lurking just around the corner. You should reject these voices. Because what they suggest is that our brave and creative and unique experiment in self-rule is somehow just a sham with which we can’t be trusted

We have never been a people who place all our faith in government to solve our problems. We shouldn’t want to. But we don’t think the government is the source of all our problems, either. Because we understand that this democracy is ours. And as citizens, we understand that it’s not about what America can do for us, it’s about what can be done by us, together, through the hard and frustrating but absolutely necessary work of self-government.”

Perhaps the voices he was referring to were these . . .

"My reading of history convinces me that most bad government results from too much government." ~Thomas Jefferson

"You can't be for big government, big taxes, and big bureaucracy and still be for the little guy." ~Ronald Reagan

"The contest for ages has been to rescue liberty from the grasp of executive power." ~Daniel Webster

"Government is not reason, it is not eloquence, it is force; like fire, a troublesome servant and a fearful master. Never for a moment should it be left to irresponsible action." ~George Washington

"There will never be a really free and enlightened state until the state comes to recognize the individual as a higher and independent power, from which all its own power and authority are derived, and treats him accordingly." ~Henry David Thoreau

"No method of procedure has ever been devised by which liberty could be divorced from local self-government. No plan of centralization has ever been adopted which did not result in bureaucracy, tyranny, inflexibility, reaction, and decline." ~Calvin Coolidge

"Once a government is committed to the principle of silencing the voice of opposition, it has only one way to go, and that is down the path of increasingly repressive measures, until it becomes a source of terror to all its citizens and creates a country where everyone lives in fear." ~Harry Truman

But consider recent headlines:
Then weigh these headlines against the warnings of the voices vs. the warning of Barack Obama. . .  and if you prefer "liberty and justice for all" to tyranny,  heed the voices!
Posted by marleed at 10:14 AM No comments:

Senior adviser to the  President, Dan Pfeiffer appeared on Fox News Sunday and informed host Chris Wallace that the President's whereabouts during the events of 9-11 in Benghazi, Libya were beside the point, unimportant.

WALLACE: But with due respect, you didn't answer my question. What did the president do that night?

PFEIFFER: He was kept -- he was in constant touch that night with his national security team and kept up to date with the events as they were happening.

PFEIFFER: He was talking to his national security staff, his National Security Council, the people who keep him up to date about briefings as they happen.

WALLACE: Was he in the Situation Room?

PFEIFFER: He was kept up to date throughout the day.

WALLACE: Do you not know whether he was in the Situation Room?

PFEIFFER: I don't remember what room the president was in on that night. And that's a largely irrelevant fact.

Though the fact that the President refuses to reveal his  location that day/night is troubling, there is a case to be made that Pfeiffer is right. Obama's location is largely not important, not only in the case of Benghazi, but in virtually every other scandalous event of his Presidency.  There's little indication that the outcome in Benghazi would been better had the President been in the "Situation Room" nor would more time in the Oval Office have improved the Affordable Care Act.  After all, when you're perniciously inept, you can make half assed, wrong decisions ANYWHERE. Thus, Obama, whether on the golf course, at a campaign event, or in the Situation Room, is successfully destroying this country .  .  . And THAT'S a relevant fact!
Posted by marleed at 12:33 PM No comments:

Thanks to Gateway Pundit for the heads up!
Posted by marleed at 7:24 PM No comments:

. . . claim no cover up, no malice aforethought with regards to the administration's response to events in Benghazi.

According to them, they're just idiots!

The officials spoke to CBS News in a series of interviews and communications under the condition of anonymity so that they could be more frank in their assessments. They do not all agree on the list of mistakes and it's important to note that they universally claim that any errors or missteps did not cost lives and reflect "incompetence rather than malice or cover up." ...

"We're portrayed by Republicans as either being lying or idiots," said one Obama administration official who was part of the Benghazi response. "It's actually closer to us being idiots."

Idiots?  A label that may also apply to the folks down at the IRS who today in a Congressional hearing blamed their abuse of conservative groups seeking tax exempt status on "bad customer service" and "foolish mistakes"  while denying any specific targeting or partisanship.

Just lying idiots!
Posted by marleed at 7:55 PM No comments: 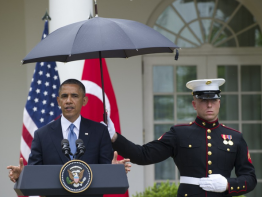 President Obama, who never met a military budget he didn't enjoy cutting,  holds a press conference in the White House Rose Garden to, among other things, attempt to once more explain his unwillingness or inability to protect two Navy Seals in Benghazi, Libya.  Unfortunately, it starts to rain .  .  . But don't worry, Mr. President, the Marines have YOU covered!

muttering under my breath
Posted by marleed at 6:40 PM No comments:

Seven foreigners were caught trespassing at the Quabbin Reservoir (Belchertown, MA) shortly after midnight on Tuesday.

State Police say the five men and two women are from Pakistan, Saudi Arabia, and Singapore, and “cited their education and career interests” for being in the area. The men told police they were chemical engineers and recent college graduates.

Just a bunch of engineers and college grads admiring the reservoir which supplies drinking water to Boston .  .  .  in the middle of the night.  Oh yeah, and although it's politically incorrect to notice, they're Muslims (They're also still roaming around free, as they were released.)

What could POSSIBLY go wrong?

The IRS debacle explained in one image Via Da Tech Guy: 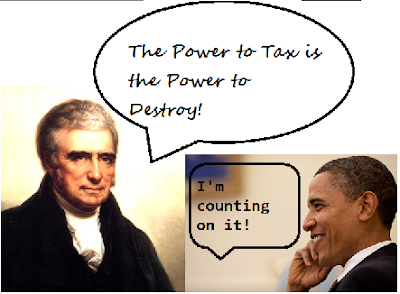 That pretty much says it all!
Posted by marleed at 11:57 AM No comments:

What Do You Call Saudi With A Doctored Passport And A Pressure Cooker?


Fortunately, federal agents recognized that this was not a joke waiting for a punchline, but with the help of a little *profiling* (purely speculation on my part)  they intercepted this potential threat at Detroit Metro Airport . . .


Federal agents arrested and charged a Saudi Arabian who flew into Detroit Metropolitan Wayne County Airport from Amsterdam with a pressure cooker and an altered passport.

Pressure cookers were used to make the bombs that killed three at the Boston Marathon on April 15. They’ve also been used to make explosive devices in militant attacks in Afghanistan, India and Pakistan.

The suspect, Hussain Al Khawahir, 33, was charged on Monday with making a false statement and with purposely using an altered passport, Raw Story reported. U.S. Customs and Border Protection agents became suspicious after noticing a passport page had been removed. They searched through his baggage and discovered the pressure cooker, Raw Story said.

The man initially said he was gifting the pressure cooker to his nephew, a student at the University of Toledo. But then he fumbled and changed his story, Raw Story reported, and “admitted his nephew had purchased a pressure cooker in America before but it ‘was cheap’ and broke after the first use,” the criminal complaint read, as Raw Story reported.

Bravo! Nice attention to detail, guys.  Profiling saves lives.
Posted by marleed at 10:44 AM No comments:

I have been driven many times to my knees by the overwhelming conviction that I had nowhere to go. My own wisdom, and that of all about me, seemed insufficient for the day. ~Abraham Lincoln