Obama: In His Wildest Dreams

Apparently Barack Obama, when he's not busy trying to deep six the American dream, has dreams of his own.  Barack fantasizes about disguising himself (complete with moustache) in order to hang out with average Israeli citizens during his upcoming trip to Israel. 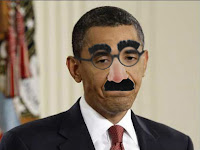 Ok, it's unlikely . . . but it might work, although I suspect his bejeweled Obama yarmulke  will give him away.