Yes, President Soreloserman, It DOES All Come Down To Politics! 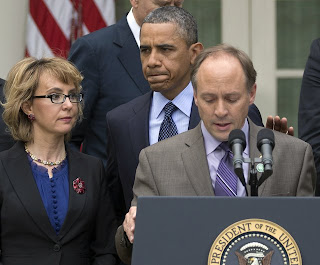 With his ego still tender from a stinging Senate rejection of "gun-control" legislation and surrounded by an obligatory collection "props",  President Obama stood in the White House Rose Garden yesterday  and pitched a major league hissy fit!

President Obama angrily blamed the defeat Wednesday of his centerpiece gun-control proposal on lies spread by the National Rifle Association, calling it “a pretty shameful day for Washington.”
“The gun lobby and its allies willfully lied about the bill,” Mr. Obama said in the White House rose garden about 90 minutes after the vote. “It came down to politics.”

Such passion, such determination, (such an angry face)! Makes you wonder why  the President hasn't displayed similar emotion with regards to our inability to obtain justice for the four Americans killed SO many months ago in Benghazi?

Can you say "selective (very political) outrage"?
Posted by marleed at 11:25 AM