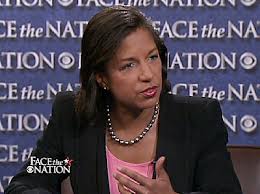 On Sunday, September 16,  Ambassador Susan Rice went on all five Sunday morning talk shows and blamed a now infamous, poorly made anti-Muslim YouTube video for the attack on our consulate in Benghazi, Libya. She did this with a straight face and virtually NO factual support...

"Stupid", you say?  Well, according to a dozen or so Congresswomen, you'd be a sexist racist . . . or is it a racist sexist?   Apparently gender and race trump the truth in most cases. (provided it's the right gender and the right race . . . GOD!  Will someone PLEASE provide me with a manual!?)

The questioning of Ambassador Rice's veracity and acuity  also infuriated our President who vigorously defended Ms. Rice by pointing out that she had NOTHING to do with Benghazi  . . . Which makes you wonder why on earth she was chosen to promote and defend the administraion's delusive account of  the Benghazi debacle.  Maybe it was connected with her willingness to do what she was told without questioning, and her ability to memorize and recite fallacious talking points?  But then, THAT  would be (regardless of gender, race, sexual proclivity, religious preference, or birthplace) really stupid!