Courtesy of the Senate Budget Committee's ranking member, Jeff Sessions, this graph clearly illustrates that Obama's solution to our financial crisis is no solution at all. (what a surprise) 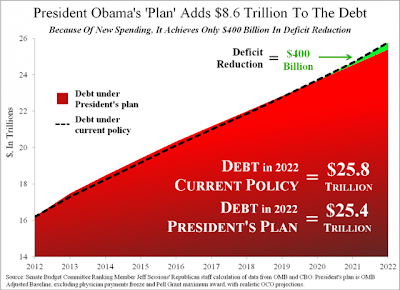 Bottom line is that Obama's plan adds 8.6 trillion dollars to the debt.  Amazingly, this is he calls a serious offer.  Really?

This President wants to raise taxes because he wants to raise taxes, not as sound economic policy since  the resulting revenues will not lower our debt (he plans on spending the resulting revenues anyway).  The ONLY remedy for the financial fix we're in is to stop spending money we don't have.  Our problem is SPENDING, a fact which Mr. Obama either doesn't comprehend or chooses to ignore.