Ok, Jesus Said We Should Do Good To Those Who Despitefully Use Us . . .

. . . But He never said we had to invite them to the White House!

Our National "host with the most" couldn't be at the lighting of the National Menorah because he was attending a star studded charity event at the White House.

PSY, born Park Jae-sang, performed at a White House charity event on Sunday, despite a deeply controversial performance in 2004 that has shocked and outraged American fans.

The rapper showed off his signature dance moves while performing 'Gangnam Style,' which has the most watched YouTube video in history.

Catchy lyrics! Now, Psy apologized for this, and other past transgressions right after they became an issue in the American press (an apology of convenience, I suspect). Nonetheless, go ahead, forgive him, just don't give him a photo op at the People's House! 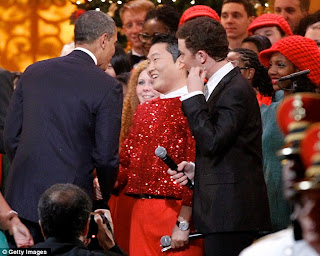